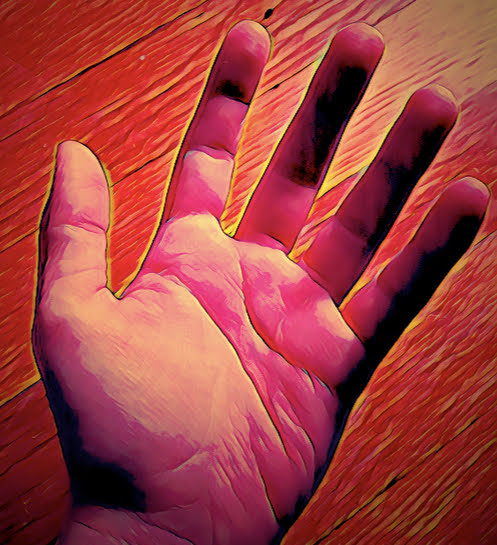 Daisy died in front of my house on an unseasonably warm Friday afternoon. Her arms were wrapped tight around the bloodiest bible you’ve ever seen. The sun was beating down nearly as hard as the car had, and I, in my wool coat and gloves, was sweating hard. I thought it was the heat, but in retrospect, seeing something like that took just as big a toll, maybe bigger.

I probably should’ve called the cops straight away, or at least taken down the number on the plate, but frankly I was so caught off guard by her and that book that I forgot to look. I thought it was red, but when I got over to where she was lying with her chest moving up and down in an uneven rhythm, I realized it’d been bloody all this time, soaked through from front to back. The craziest thing was that she herself didn’t have a speck of red on her, except where she was clutching it with white-knuckled fervor. I guess it was the impact that did it, shocked the beat out of her heart or something, but she wasn’t bleeding anywhere that I could see.

I’ll admit I let curiosity get the better of me. It always does, and I always let it, and then when I wind up in these sorts of jams I guess there’s no one to blame but myself, but anyhow I don’t believe in guilt so it all kind of works out. So I took off my gloves so they wouldn’t stain and I pried the book from her hands, but they were getting real tight, and even with the blood making the leather all slippery I couldn’t really get a good hold on it because my fingers were sliding more than hers, but I kept on. When I heard a few snapping sounds I looked down at her, and her chest had stopped moving and I said a little apology in case her spirit was still nearby and listening and yanked the book good and tight and left her fingers there at a bit of an angle.

Now I was all slick with it, and really I should’ve showered and called the cops or something but I figured she was dead and wasn’t going anywhere and I had missed the license number anyway and so I might as well take a look at this thing before the pages all fused shut.

There wasn’t much ink I could make out anymore. If you’ve ever seen paper all saturated with iron and gore then you understand it’s a whole lot darker than you’d think, and fragile. I didn’t want to rip the pages and they made this awful squelching sound when you tried to pull them apart anyway. It wasn’t hard to tell, though, from the care in the binding and the embossed golden cross on the front, that this was a bible, King James if I had to guess from the heft of it.

I was wondering where she’d gone to get such a book and how it had come to be so thoroughly drenched in blood, almost like the words themselves were dripping, when I noticed something else odd. It started with a whisper of salt, like sweat or tears, and then I saw the color fading from the bottom of the page, diluting as water began running from it instead. The ink was taken with it, just leaving paper with the memory of pinkness at the edges, and when I pried open more pages to figure it out I saw a hole there, right in the center, oozing blood from one side and water from the other.

And I said to myself, well, would you look at that, and then remembered that in the heat of the day Daisy would start to smell soon if someone didn’t come take care of her so I shut the bible and stuck it in the kitchen sink so it wouldn’t keep leaking on my floor, then I went and got a mop and after that took a shower, and when I called they didn’t take long at all to show up and block off the road while they took pictures of her lying there with her skin unruptured and her fingers all broken up and bloody.

Later they found the guy that did it based on the approximate size and shape of the dent on his bonnet, and he didn’t say a word throughout the whole trial even when his own lawyer questioned him. He’s still locked up, but the book disappeared from my kitchen sink by Sunday even though my doors and windows were sealed. A lot of folks have come by lately, cops and reporters and curious folks asking questions I don’t have answers to, and I wonder if maybe I shouldn’t’ve touched it at all because they just keep coming like rats.

I can’t believe someone wrote a few lines from a Macbeth soliloquy in this tunnel and it wasn’t even me 🤷🏽‍♀️ oh well, maybe I’ll add on tomorrow (and tomorrow, and tomorrow)
Some views from Puebla
Is it too soon to miss it?
%d bloggers like this: